Guide through the municipality

With a surface area of 51 square km (or 31.7 square miles) and a population of approximately seven thousand inhabitants, Rače-Fram is a medium-sized Slovenian municipality, consisting of two very different areas. In the east, the municipality leans onto the elongated Drava Plain, while in the west, rural farms that defy industry pepper the slopes of the (lush green) forested Pohorje Massif.

When the municipal centre Rače was established Rače soon became the catalyst of industrial development. One such example is the former methylated spirits factory that later became the chemical factory TKI PINUS.

The old Rače community centre and other lowland communities (Podova, Brezula and Zgornja and Spodnja Gorica) still reflect the traditional rural character of the fertile Drava plain, but with the population growth and the modern way of life they are increasingly losing their original identity.

While the lowland area was characterised by the methylated spirits industry, Fram and the slopes of the Pohorje Massif were marked by the production of pumpkin seed oil, water mills, sawmills and wood industry. With the exception of the three pumpkin seed oil mills and a private mill, other once important industries are no longer active. There are still several private smaller sawmills on the Pohorje Massif, while very few woodworking workshops have been preserved.

The highland area with its unique rural charm is increasingly becoming a significant tourist attraction. The remote and tranquil Planica community provides a fusion of genuine intimacy, rural scenery and culinary delights characteristic of the Pohorje Massif. Wine producers from other communities (Kopivnik, Ranče, Morje, Loka pri Framu) have also become part of the tourist wine road. The cultural heritage, which is preserved and evenly distributed throughout the entire local community, adds a special charm to the municipality. Among the many natural and cultural attractions we would like to point out the former mighty "lowland island" Castle Rače (Kranichsfeld) from the second half of the 16th century, known for its Baroque, Gothic and Renaissance architecture.

When heading to the Pohorje Massif or climbing up the marked hiking trails, you can enjoy the view of the original village of Fram centred around the Church of St. Anne (Cerkev Sv. Ane), an urban monument with neo-Romanesque motifs. Only ruins of the Castle Fram (Vraunhaym), built in 1200, now remain. An important historical monument is the "Golden Spring", the source of drinking water for the Roman Poetovio (today known as Ptuj). The installation of routes and trails for cycling, hiking and walking and the gradual development of the Landscape Park Rački ribniki-Požeg are important steps towards the new, more natural way of life. These efforts will encourage further development of tourist activities and, consequently, contribute to the economic growth of the municipality of Rače-Fram.


People are the essence of our municipality. Seven thousand of us live in beautiful, picturesque and well-maintained village communities, surrounded by the Drava Plain on one side and the wooded slopes of the Pohorje Massif on the other. We are known for being a hard-working, creative but stubborn, and open-minded people. You will remember us for our characteristic Styrian hospitality and sense of joy. Industrialisation left its mark on the lowland parts of the municipality and the municipal centre of Rače, but the old Rače town centre and other lowland communities (Podova, Brezula and Zgornja and Spodnja Gorica) still reflect the traditional rural character of the fertile Drava Plain.

ROMANTIC DESTINATION
Your heart will flutter at the sight of one of the best kept castles in Slovenia, the magnificent Rače Castle and its unique key-shaped layout. The castle itself is known for its Gothic, Renaissance and Baroque architecture. The history of this lowland water castle goes back to the 16th century. In the castle’s interior, the White Hall will definitely catch your eye. It serves both as a wedding and concert hall, as well as a castle chapel. The castle enjoys the reputation of being a rich cultural and social centre of the municipality. Here, you will hear many stories: about the castle’s owners, about underground passages connecting Rače Castle to other castles, and about various archaeological findings. You will be captivated by romantic castle weddings, and the ethnographic museum will certainly pique your interest. The dense woods of the Fram Pohorje Massif will make you feel connected to the area’s unspoilt nature. Quiet and remote villages will warmly greet you as you pass by. Clean air, breath-taking and picturesque panoramic views, healthy and delicious homemade food – these are the things you will remember forever!

The White Hall is an outstanding wedding venue.

TOURIST DESTINATION
The Church of St. Joseph the Worker in Rače, which boasts stained glass windows made by the renowned painter Stane Kregar, and a valuable mosaic made by Father Ivan Marko Rupnik, is definitely a sight worth seeing. The two chapels in Podova and Gorica are an important accent piece for their respective village squares. The distinctive Slovenian character of the Pohorje Massif is seen in the age-old homestead in the village of Planica. The 200-year-old Vešner Homestead, located at 900m above sea level, is a proud statement of the self-sufficient lifestyle of hillside farms throughout the ages. The Church of the Holy Cross in the village of Planica, the religious gem of the area, is located on a gorgeous spot surrounded by green linden trees that will soothe your senses with their lovely scent. Under Hotel Zarja (1050m a.s.l.) and next to the Kagerjev dom mountain cottage (1080m a.s.l.) lies the spring of the Fram Brook. In the upper part of the brook’s bed, the spectacular 12-metre-high Fram Waterfall cascades down the rockface. The waters of the Fram Pohorje Massif were once much more lively: more than ninety waterwheels were generating power for local mills, sawmills and some oil mills, which gave the village of Fram its distinct character. Fram is also home to the Neo-Romanesque Church of St. Anne, which hosts the traditional “Anino žegnanje”, or St. Anne’s Feast, every July. Fram viticulture has gained the recognition of the Viennese and English courts in the past, and to this day it continues to amaze with its rich tradition and exquisite wines. The roots of the Oljarna Fram oil mill can be traced back to the year 1750. It has a longstanding tradition of pumpkin seed oil manufacture and is Slovenia’s oldest oil mill. The mill’s finest pumpkin seed oil drizzled over tasty homemade bread will offer you a healthy treat you will undoubtedly remember.

CHILDREN’S DESTINATION
The peaceful and quiet Rački Ribniki-Požeg Landscape Park is perfect for rest and relaxation. The beauty of the park is enhanced by the surrounding mixed forests, numerous ponds, brooks, its wet pond and meadows. Over 210 species of birds, both rare and common, as well as 12 species of amphibians call this park their home. If you listen closely, you will be able to hear their captivating melodies and distinct sounds. The park also hosts one of the most beautiful parts of the Amber Route. In close proximity to the park is the TAL 2000 Botanical Garden. It boasts the largest collection of wild aquatic plants in Slovenia, and an interesting collection of medicinal and poisonous plants. You can feast your eyes on the beautiful white water lilies (Nymphaea alba L.) and yellow floating hearts (Nymphoides peltata (S. G. Gmelin) O. Kuntze), dragonflies will dance all around you, and the vigorous croaking of frogs can get so rambunctious that it might drown out the children’s cheers for a few moments. The footpaths and trails of the Pohorje Massif will lead you through forests, past pastures and meadows and along scenic brooks. Surely, the two natural superlatives of the area – the Potnik Spruce (Castanea sativa Mill.) and the Potnik Pine (Picea abies (L.) Karsten) – will not be left unnoticed. You might also encounter local deer, roe, rabbits and even wood grouse along your journey. And don’t be surprised if you happen to come across some mushrooms.

GOURMET DESTINATION
The warm homemade bread made in wood fired ovens perfectly embodies the richness of life found in the golden wheat fields and among locals of the Drava Plain. The hills of the southeastern Pohorje Massif are abundant with vineyards of Fram and Morje, and fruit farms found in Loka, Kopivnik, and Ranče. After the villages of Planica and Šestdobe, this lush agricultural area slowly transitions to a more wooded part of the Pohorje Massif. Along the local wine road, several homesteads offer a cosy but authentic rural atmosphere and a variety of culinary treats typical for this part of the country: try the ‘pohorski pisker’ stew, buckwheat ‘žganci’ with mushroom soup, dry-cured meat known as ‘pohorska bunka’, cottage cheese or walnut gibanica for dessert, and blueberry schnapps. These culinary specialties made from locally grown fruit and herbs, apple vinegar, dandelion honey, the signature Fram tea, and the rich fauna and flora will, without a doubt, leave a lasting impression.

Happy is my heart!
Welcome to the Municipality of Rače-Fram! 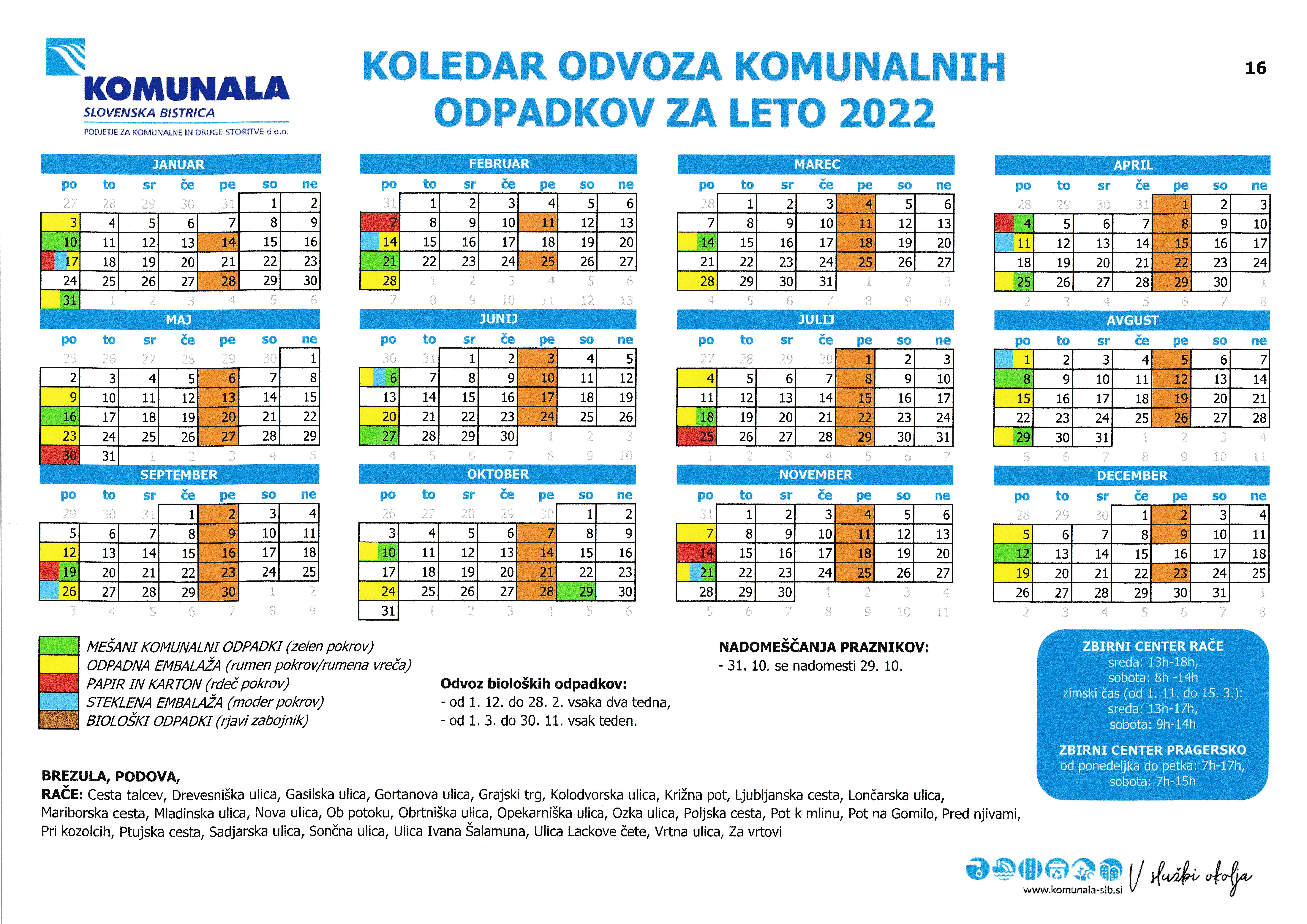 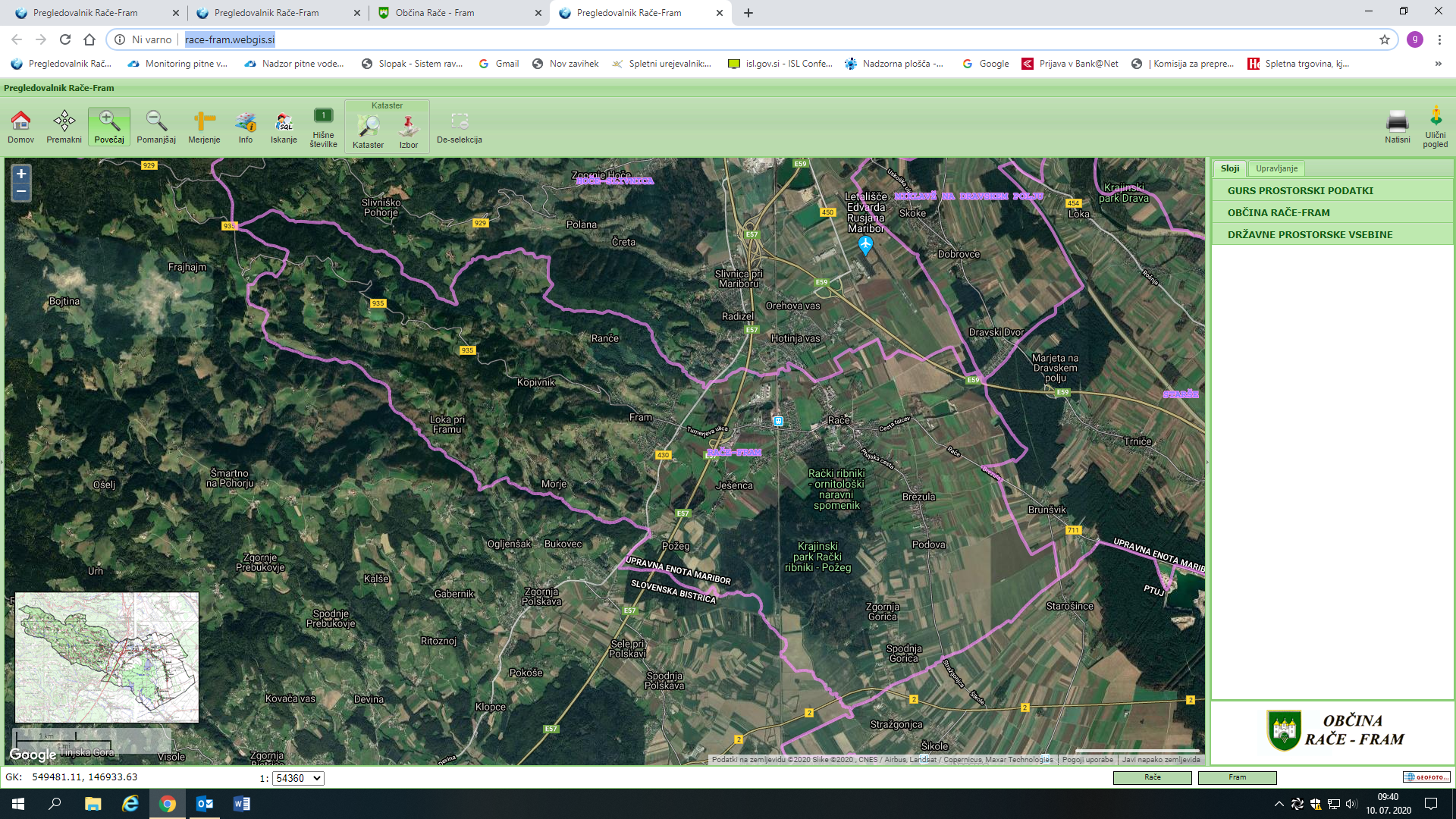 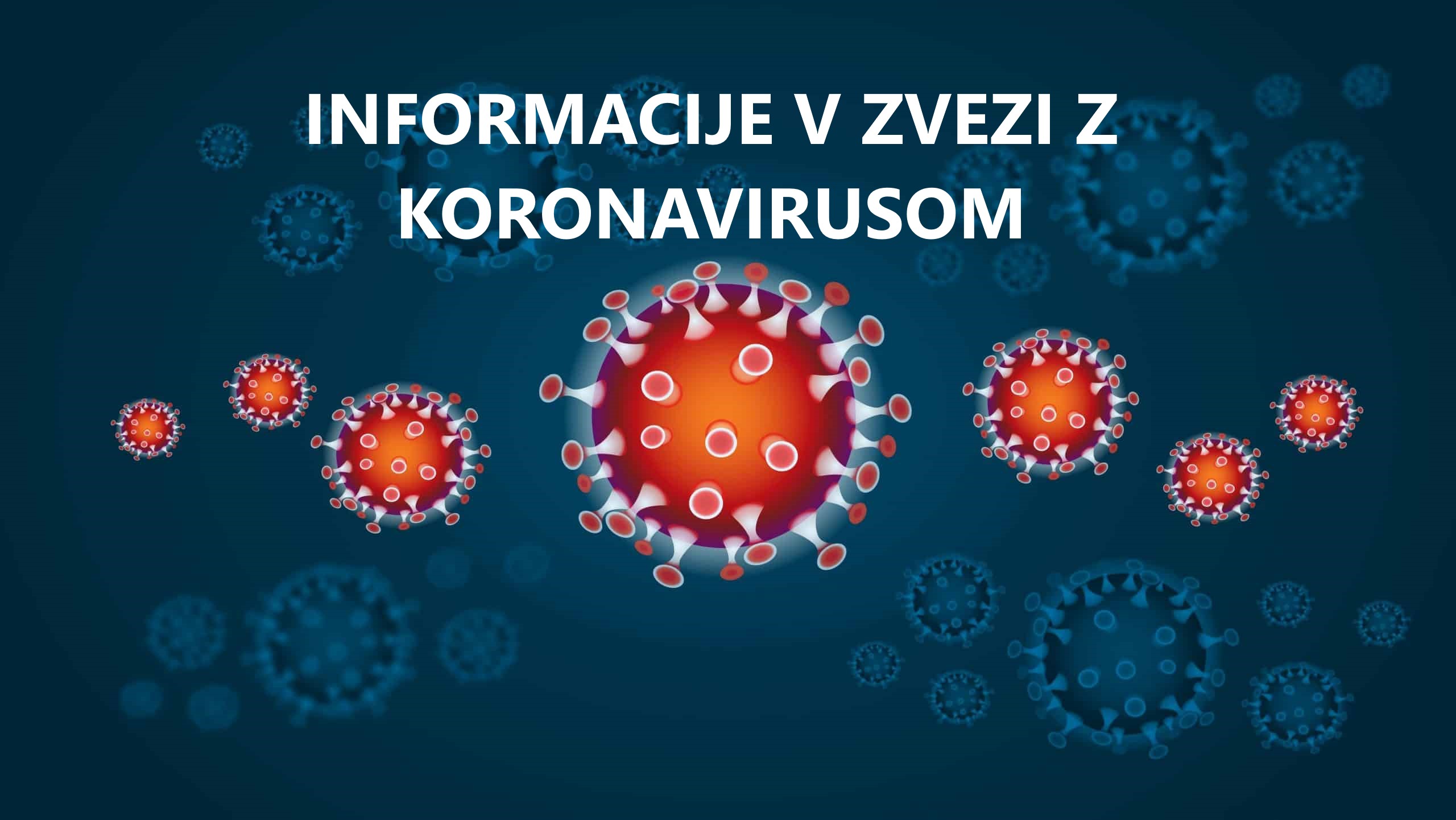 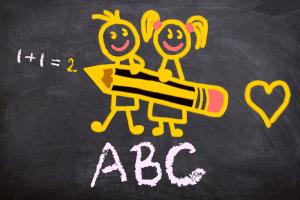 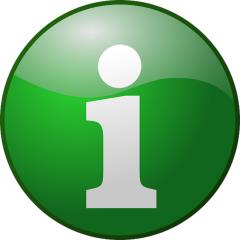 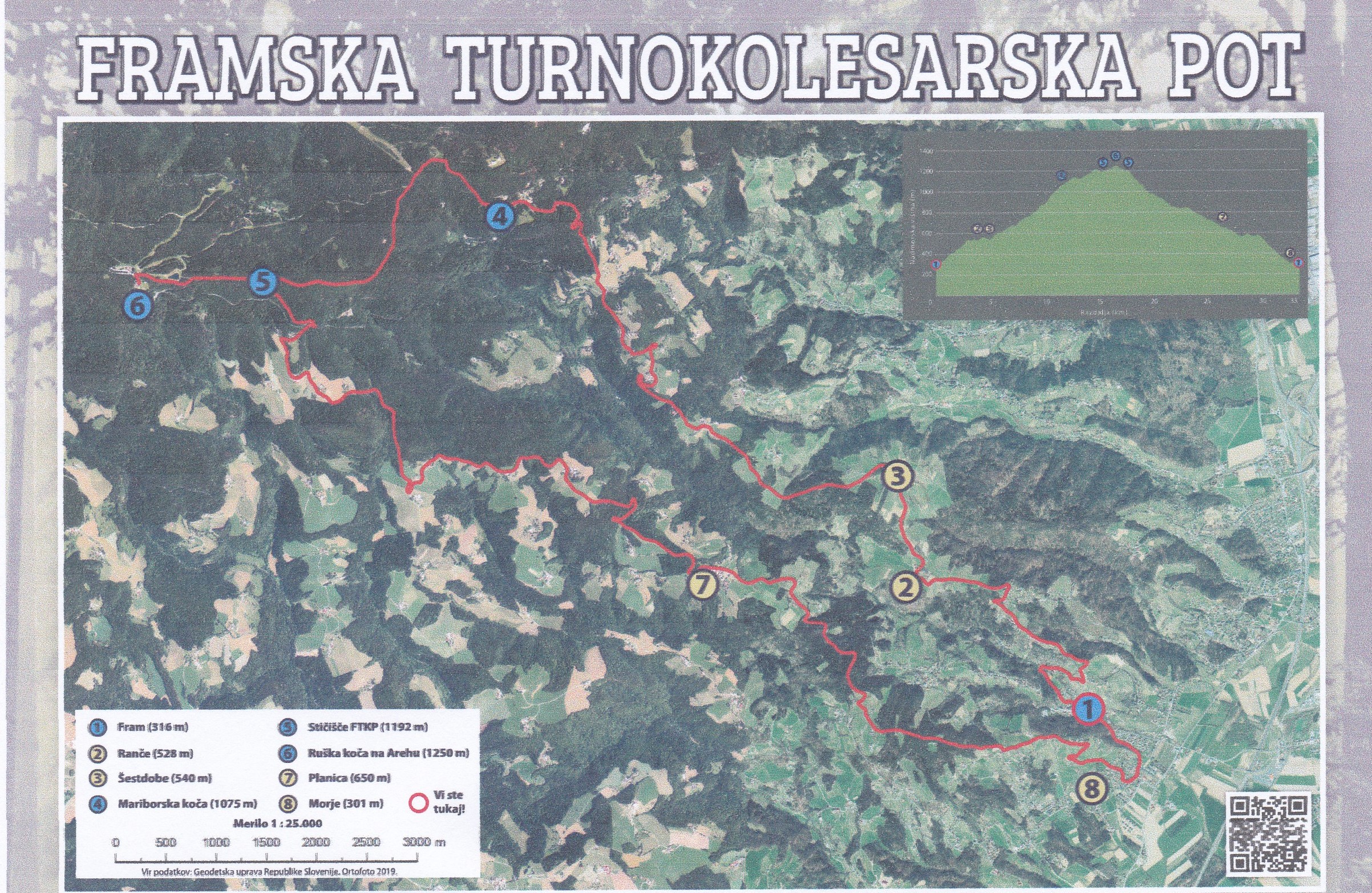